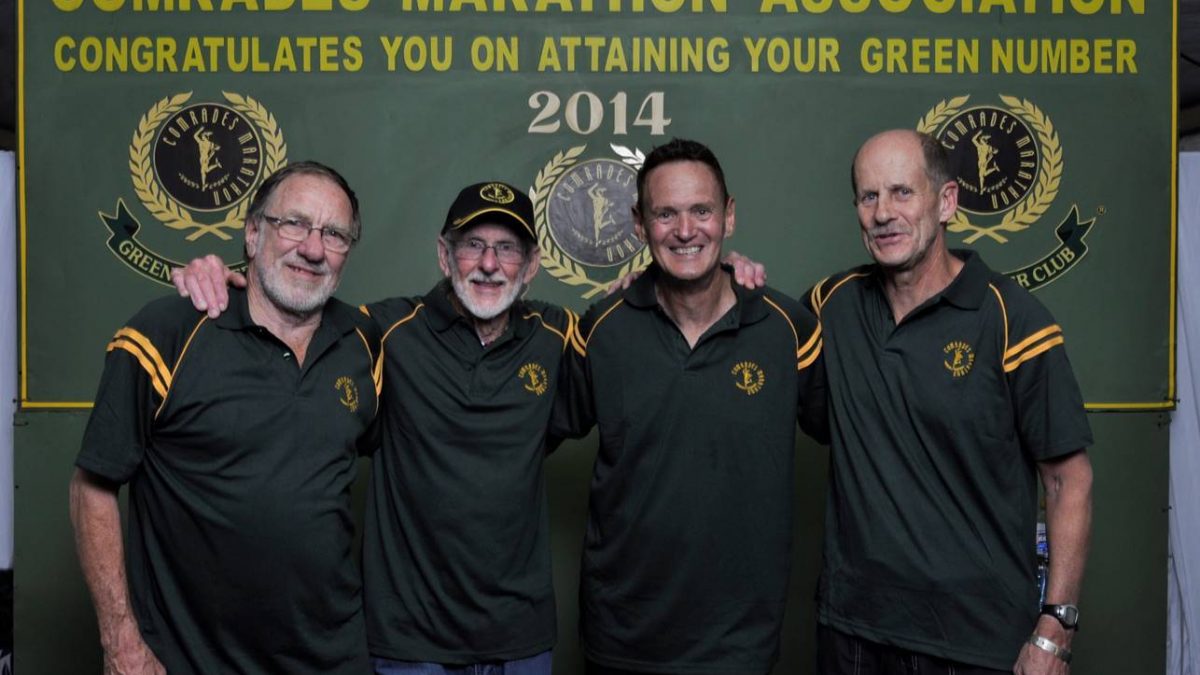 Africa Marathons along with the Comrades Marathon Association (CMA) is saddened by the news of the death of Clive Crawley. He was 89 years old. Clive was the holder of Comrades Race Number 1 since taking on his very first Comrades Marathon in 1957, having been a member of Savages Athletic Club for just about his entire running career.

The numbers say it all

His best time however of 6:11:19 was achieved in 1971 when he finished in 10th position, during which time Gold medals were awarded to only the first 7 positions.

Clive Crawley – A Legend of the Comrades Green Number Club

For nearly one and a half decades after retiring from the race in 2000, Clive was a regular at the Green Number facility, handing out Green Numbers to new inductees onto the Green Number Roll of Honour, inspiring runners to even greater heights and continually motivating people to give of their best.

Kenny Craig, a very close friend of Clive says, “Fellow Comrades Green Number runner, Lolly Thomson, who remains a good friend of Clive’s wife Trish, was the first to hear the sad news. I was the second. From what I hear, it was a very sudden death and it has come as a huge shock to us.”

Kenny adds, “In my 20’s, I must admit that I never really knew him. He was a bank manager when we first started running together. Then it so happened that in 1963, I needed a bank loan of R200 to buy a house, which was a lot of money back then. He approved it without thinking about it. I was baffled and he then turned to me and said, ‘You are a runner, I can trust you.’ We got to know each other over the ensuing 6 decades and ran together every Tuesday and Saturday.”

Kenny concludes, “Of all the hundreds of athletes I have run with, he was the oldest survivor. I’m glad I spoke to him on his 89th birthday on the 30th of April. I feel richer for the time spent with Clive, when he lived in Himeville and then in Stellenbosch. It was fun to run with a thorough gentleman and a true legend. When he turned 60 years of age, we ran 60km. On his 70th birthday, we ran 70km. And then when our running days were over, we cycled that many kilometres. Clive lived a life worth living.”

CMA Chairperson, Cheryl Winn says, “We are deeply saddened by the news of Clive’s passing. His Quadruple Green Number achievement of 42 Comrades finishes, especially being the first to achieve such a milestone, best time of 6:11:19, and distinct honour of being the holder of Green Number 1 for perpetuity, is nothing short of phenomenal. Clive’s impact on the race and the inspiration he held for so many Comrades runners has left a void that few could ever fill.”

Cheryl adds, “Our thoughts and well wishes are with his family, especially his wife Trish, also a proud Green Number runner. We wish you strength during this difficult time and thank both Clive and Trish for their huge contribution to the Comrades Marathon and running in general. For many years Clive served on the old Natal Marathon Runners Association, a forerunner of today’s KZNA and numerously represented KZN over various distances and age categories.”

CMA Board Member, Isaac Ngwenya says, “Clive was a compassionate, caring and wonderful human being. He put runners first and made time for people no matter how busy he was. His organising of the Sani Stagger Race, together with his wife Trish was impressive. There are many notable things about this gentleman that we will reflect on in the years to come and remain deeply appreciative of. I can say that he was someone worth knowing and he will undoubtedly be missed by all. May his soul RIP.”

Former CMA Green Number Convenor, Eileen Hall says, “Clive would be at the Green Number facility all day long, handing out Green Numbers. He would take pride in motivating and inspiring runners, with no wish to sit at the VIP facility or anywhere else. Such was his dedication to the runners and taking joy in chatting to Green Number inductees.”

Eileen adds, “As a runner, I remember following him, wondering how he got to become Comrades Runner Number 1. He would turn around and say, ‘Please don’t follow me, I’m struggling.’ Only later did I get to know him. I found him to be a dedicated person and a humble human being. He was a reliable and deeply respecting individual, not one to brag of his epic achievements, someone who was a very fastidious and special person who lived for Comrades. We will miss him!”

CMA Elder, Poobie Naidoo says, “Clive was an amazing, kind and friendly person who made time for people. He was committed to his running and shared a deep and relentless passion for the Comrades Marathon. It was inspirational to see how much he lived to run Comrades every year. Our heartfelt condolences to Trish and the family. May the Almighty give them courage and strength during this sad time.”

Former CMA Board Member, Alen Hattingh says, “RIP Clive Crawley, Comrades Legend Number 1. Clive ran 42 Comrades with a best of 6:11. He was the first man to reach 40 Comrades together with Kenny Craig. We will remember him fondly and miss the inspirational and motivational way in which he touched people’s lives.”

CMA Race Director, Rowyn James says, “I got to know Clive through his wife Trish during her days as the Sani Stagger organiser and more recently during my tenure here at Comrades Marathon. Clive was always willing and prepared to assist with the handing out of Green Numbers at the finish for which he will be fondly remembered and dearly missed. I always valued being able to tap into and call on the wealth of wisdom, experience and knowledge that Clive possessed. Rest well Clive, on a race well run.”

Fred McKenzie of Westville Athletics Club says, “The last time I chatted to Clive was when receiving my Green Number back in 2013. He was a legend and inspired many of us to aim high and achieve more. I was definitely in the company of legends back then. Our sincere condolences to Trish and his family. May he RIP.

Former CMA Board Member, Terence Hoskins, “It is very sad to hear of Clive’s passing. He was a legend and a true inspiration. May his soul rest in peace.”

Messages from other Comrades Marathon personalities

Comrades Coach, Lindsey Parry says, “Such sad news. Another giant of the Comrades Marathon has fallen. It is fitting that later this week we will celebrate the Legends of Comrades of which Clive certainly is one. Rest in Peace Clive, one of the Comrades Pioneers.”

Nedbank Running Club Manager, Nick Bester says, “It was always a pleasure to see and talk to Clive and his wife. The last time I saw Clive was at the Sani to Sea mountain bike race and we had a beer together. The Comrades family has lost a true gentleman and great ambassador.”

PDAC Secretary Colleen McCann says, “The members of Pinetown & District Athletics Club convey their deepest condolences to the family of Clive Crawley on his passing. We share your sadness as we remember Clive.”

Emmanuel Lushaba says, “May you rest in peace Clive, we will always remember you and the effort you have shown us in this Long Run.”

CMA Novice Hospitality Convenor, Peter de Groot says, “Clive was a true gentleman and a legend who inspired so many of us. I was honoured to receive my Green Number from him in 2006. At the Novice Hospitality facility, we were also privileged to have him so enthusiastically sharing his experiences and his passion for the Comrades with the novices. He will be missed. RIP Clive. Heartfelt condolences to his wife and family.”

Mtunzini Athletics Club Chairman, Paul Mannix says, “Our sincere condolences to the Crawley Family. So many of our runners were inspired by Clive’s accomplishments. May he rest in peace.”

Umgeni Water Athletic Club Chairperson, Philani Khumalo says, “Words do not suffice to express our heartfelt sorrow as the running community for the passing of Clive, the legend. Each and every athlete was inspired by what has been achieved by this noble man in athletics. Such a milestone; having run and finished 42 Comrades Marathons was truly amazing!

Clive’s resilience and perseverance was witnessed in his 70s when he persistently participated in The Ultimate Human Race. He has indeed inspired a lot of athletes, even the generations to come will be encouraged by his great achievements. Our heartfelt condolences to the family and friends.”

Former CMA Chairperson, Barry Varty says, “Whereas the future is speculative, the past is factual history. The Comrades Marathon history records the absolute achievements of all who have completed this most admired and cherished South African athletic event. Since it’s inception in 1921, the Comrades Marathon has inspired thousands, and in addition to every winner, many runners have become idols and role models within the Comrades Family and can be aptly referred to as Legends. As a novice, Clive Crawley was my idol.

It was just a matter of time until I met him, whereafter we became personal friends. Clive provided a comprehensive set of Comrades Marathon news clip scrapbooks. These were copied and added to the ongoing accumulations of history data. The attributes of Clive Crawley, and his contribution to the Comrades Marathon in so many ways, is rightfully recorded in the annals of this iconic event. RIP Clive Crawley. Comrades Marathon idol, role model and legend.” 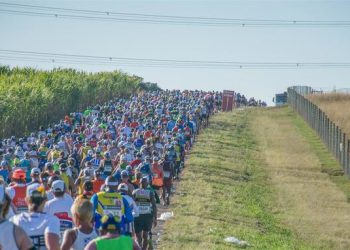 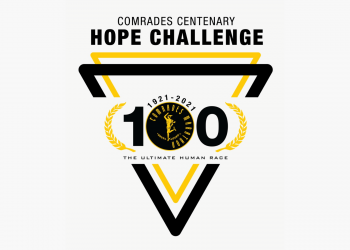